Irrigation along the Columbia River, one of the many things that concrete makes possible

Coming in Fall 2020, Rock of Ages: How Concrete Built the World as We Know It

After all this time, new review of River Music

Coming in October 2019: Why Some Places That Are Alike Aren't Alike 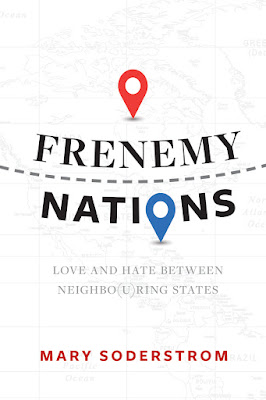 In the summer of 1968, in the middle of the American involvement in the Vietnam wars, Mary Soderstrom and her husband  loaded up their VW Beetle and immigrated to Canada so he could accept a job in Montreal.  The contrast between their new home and their old led to a long-running reflection on what makes the countries different, and by extension, what makes States and states who have so much in common that they seem like unidentical twins, continue as separate entities.
In  Frenemies Nations: Love and Hate between Neighbo(u)ring States,  Soderstrom uses decades of study, travel and observation to investigate this conundrum, beginning with the reasons why there were two Vietnams way back then.  The other examples she found are many and varied:
* New Hampshire--home of "Live free or die" populism--and Vermont--home of Bernie Sanders and his peculiarly American brand of socialism;
*Two Canadian provinces, red neck Alberta and Saskatchewan, the cradle of Canada's universal health care system;
*Tunisia and Algeria;
* Burundi and Rwanda.
*Haiti and the Dominican Republic
*The ancient island realms of Scotland and Ireland
*The Indian states of  Kerala and  Tamil Nadu
* Spanish-speaking and Portuguese-speaking South America
The book ends with consideration of the United States of America and Canada as well as speculation about what brings change to  societies. These include geographic variations, no matter how minimal; colonial history that sometimes depends on the toss of dice half a world away; exposure to the wider world; the traditional place awarded women; the shelter that a language can give; how the people are educated; and migration, both voluntary and involuntary.  All of these have implications for the way polities develop.  They also carry lessons for those who'd like to change the future.